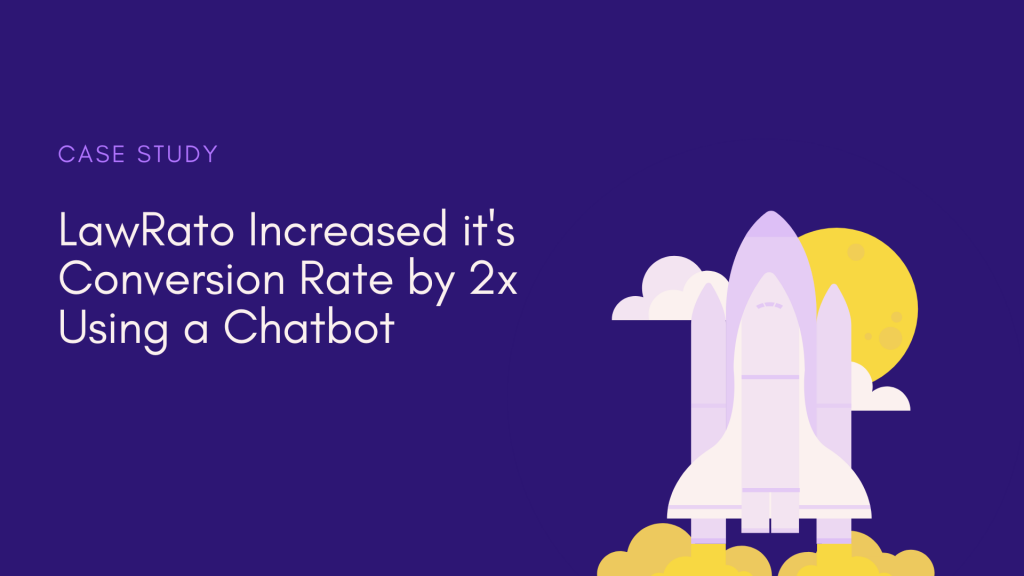 If you are faced with a legal issue, what is the first thing you do to find a solution?

For most people the answer is a quick Google Search. But then what? Each page you open from the search results contains highly technical legal terms that you don’t understand and after reading, re-reading and refreshing the pages hoping that something new will pop up, you manage to decipher that the answers before you somehow conflict with one another. To make matters worse, both pages bombard you with spammy live chat pop-ups urging you to consult with the law firm that owns the site.

At this point, there is a good chance that you will do what all normal human beings would do in your situation: close the tabs and pretend like your issue doesn’t exist. This is the exact problem, that Nikhil Sarup and his team at LawRato are trying to solve.

Check out this quick video which explains the challenge LawRato was trying to solve with Chatbots and how did they go about doing it :

After spending years developing software and running digital marketing campaigns for big corporations, Nikhil decided he wanted to make a difference in the lives of average citizens. He and his co-founder Rohan Mahajan started LawRato, an online aggregator for legal advice. Unlike other online law sites which organize resources around selling the services of individual law firms, LawRato takes a more holistic, “issue-based” approach to the problem that centers around “answering all the legal questions that prospects have.”

In practice, this means providing everything from Stackexchange style Q&As (that are answered by trained legal experts), in-depth written guides and also, in the slight chance that you actually need them, recommendations for the best lawyers in your area.

Of course, aggregating a variety of legal resources in a single website is just part of the picture. It does not guarantee that prospects actually find what they need. The vast majority of prospects don’t have a law degree, and if they are looking for legal advice, they are probably in a vulnerable mental state which occludes their ability to make a measured assessment of the information they find on the LawRato site.

To reduce this friction, LawRato has employed a multi-faceted approach to make the information discovery and conveyance process more human. They have invested vast amounts of time and money into optimizing the interface of their websites, hired teams of trained lawyers to write crisp, easy-to-understand content for their site and, in recent months, they have employed a chatbot marketing approach in their lead generation process to increase conversion rate by 80%.

Of the nearly million visitors that land on LawRato’s website every month, the vast majority find the answers they need in detailed written content available on the site. A smaller, but nonetheless significant subset of traffic however, often finds that their problem requires the consultation of a lawyer. In the past, prospects like this faced a high levels of friction in the lawyer discovery process because they did not have a deep enough understanding of legal systems to discern the hundreds of top rated lawyers listed on the site.

This friction had a direct impact on LawRato’s ability to generate leads as it meant that prospects would bounce once they landed on a listings page.

LawRato decided that the best solution to the user awareness problem was to curate results for users.

Before using chatbots, this approach was implemented using a two-pronged approach to solve the user awareness problem problem:

These systems worked but they were deeply flawed. The form-based approach was cheap, but it was hampered by the harsh truth that no one likes filling out forms. In the legal space especially, forms have a particularly low conversion rate because prospects (who are likely dealing with a harrowing personal/legal issue) want to have a real conversation, and don’t feel comfortable sharing their deeply personal information through a form.

The live chat approach solved the impersonality issue of the forms but it was expensive and time consuming. Since LawRato was only able to allocate 2 case managers to handle thousands of daily requests, wait times were long and service was unavailable outside of work hours. To compound this issue, training and hiring case managers to handle requests put a strain on LawRato’s resources.

The end result was a poor lead generation user experience and a terrible conversion rate.

Nikhil worked with Tars to build and deploy a lead generation and qualification chatbot to the LawRato website. The resulting chatbot today lives in a widget on the corner of every page ready to capture leads through an automated conversation with prospects.

In the months since the chatbot’s initial release, Nikhil has run several experiments to optimize it’s conversational flow for maximum conversions.

In fact recently, they have taken this experiment even further. Using the Tars API integration feature to assess a user’s intent before they even open the chat, the bot’s first message is personalized to the prospect’s needs. In practice, this means that if you go to LawRato’s website and look for a lawyer to help you with a Cheque Bounce, the bot doesn’t ask you to choose which legal issue you are facing from a list, but rather confirms that you are in fact looking for a cheque bounce lawyer.

The end result with the Chatbot is a hyper-focused lead generation experience with zero training costs, zero wait time, 24/7 availability, a personalized UX and a 80% increase in conversion rate.

LawRato’s chatbot approach helps them generate thousands of leads every single day at a higher rates than both the forms and live chat which they used earlier.

Their experience using chatbots serves as a guiding template for increasing efficiency for any business running a B2C service in which awareness levels are low, and lead generation, qualification and follow-up are a key part of the sales funnel. More importantly however, they have effectively shown how chatbots can be used to deliver a user-centric lead generation experience that ensures that more people get the services that they need in their times of personal and legal misfortune.

Culligan is a global water treatment company headquartered at Rosemont, Illinois in…

The Avec Group is a leading global healthcare operator, with a vision…