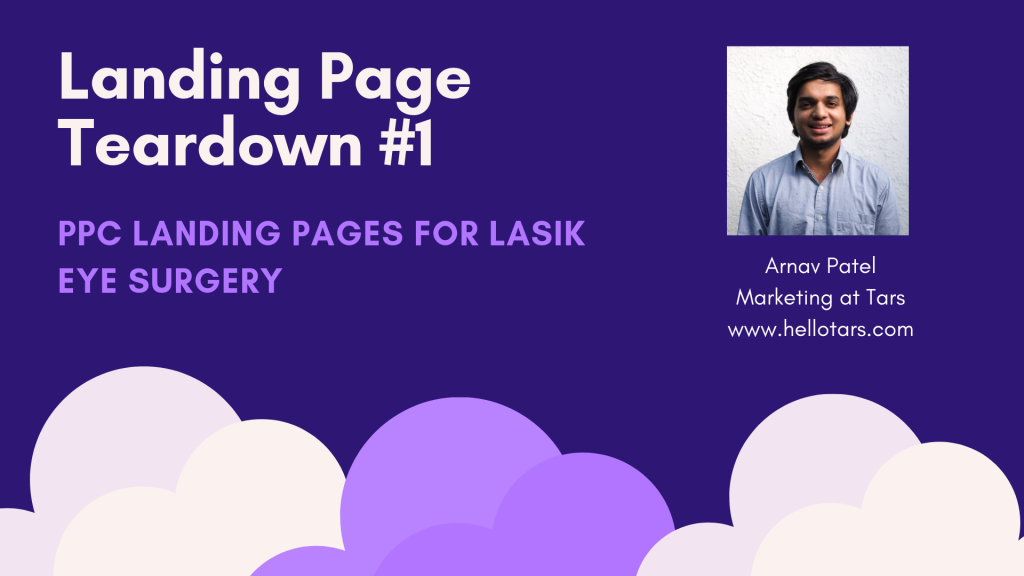 Regardless of what role they have on the team, pretty much everyone at Tars examines, critiques and rebuilds 5-10 client landing pages per day. Our process for doing so usually involves a lot of back and forth on Slack where we share Loom videos of ourselves talking through the critiques of the client’s landing page and the ways in which a chatbot could help. About a year into doing this everyday, we had the late realization that these videos are the sort of actionable content which marketers love, so we made this blogpost and teardown video to give you a sense of how we turn a traditional landing page into a conversational landing page.

To start this series off, we are taking a look at the way LASIK eye surgery providers create landing pages for their Google Ad campaigns. Believe it or not it’s really fascinating. We had a client a few months back who used conversational landing pages to drop cost per click dramatically, and we had a blast helping them out.

For the unaware, here’s a crude explanation of LASIK: If you wear glasses, you can pay a doctor to fix your vision by shooting lasers into your eyes and making some precision cuts.

Here are a few characteristics we have noticed about the LASIK market:

High Average Ticket Size – As you might expect for a service which requires years of rigorous and not to mention expensive med school to complete, average ticket size is large. The average price for a LASIK in 2017 surgery was about $2088 per eye.

Location dependent – This aspect is pretty self-evident. Surgery requires the patient and surgeon to be in the same place. It’s not like software.

Heavily reliant on paid presence – We Google searched LASIK eye surgery in New York and Los Angeles, California and in both places we found that the first 3-4 links are Google Ads.

Super-competitive – We honestly had no idea how competitive LASIK eye surgery market was until we worked with a client in the space (check out the case study here). Other than the fact that there are a lot of paid links in google searches about LASIK, the hyper-competitiveness of the space is evident in the cost per click of the ads. LASIK providers spend up to $15 per click.

In the making of this blogpost and video, we clicked on a  LASIK Ad 17 times, which essentially means making this piece of content cost the unsuspecting LASIK surgeons of Los Angeles 255 dollars.

To find an example of a LASIK landing page, we Google searched “LASIK eye surgery Los Angeles” and clicked on the ad which appealed to us the most. In this case, we clicked on the ad offering us a 20% discount, because who doesn’t like a good discount.

(You can check out this landing page over HERE)

The landing page suffers from a lot of the same problems we see everyday in our clients’ landing pages.

Here are the three most prominent:

Look stock images aren’t bad by themselves, but the stock images on this landing page are just a bit too stock-y for my liking. The one next to the call CTA in the top right is especially bad. It’s so generic, that I feel like calling the number will drop me into just another scripted sales call with a call center rep who doesn’t really know anything about LASIK.

Regardless of industry, the vast majority of lead generation landing pages use forms to capture leads and in all of these situations we cringe at the site of a form, because let’s face it, who likes filling out a form. But in the healthcare space, using a form is particularly egregious.  Speaking to our customers in the space, we have found that:

Even for a procedure as basic and low-risk as LASIK, prospects want to have a conversation with someone before they actually give out their info. As a result, a form is just way too impersonal as a way for capturing leads for LASIK. Yet, on the mobile version of this page the form takes up over 33% of the screen space.

3. Too much text on the page

Nielsen conducted a study in 2008 in which they found that most prospects read about 28% of the content on a page.

That was in 2008, before apps like Instagram and Snapchat had shrunk people’s attention spans to Goldfish-esque levels. Today, I am sure that number is way less. Yet, the creators of this landing page deem it necessary to add a pretty lengthy paragraph explaining why they are the right choice on top of all the regular text you can see on the site (form labels, menu buttons, call CTA).

To bring all of these points together, I would say that the overarching issue with this landing page is that it looks like it was made in the early 2000s. In an age where prospects access well-made landing pages and apps built by teams of UX developers sitting in the backrooms of large tech companies, old web-design is a death sentence. It’s not that people hate landing pages that look dated, but it certainly is a turn-off which induces people to bounce when they realize they could be instead be scrolling through facebook or instagram.

How a conversational landing page addresses these problems?

The reason chatbots are so good for lead gen is that they don’t ask for all a user’s information in one go. Instead a user is asked for each detail one at a time through a back-and-forth interaction which feels like a human interaction even though the bot has about as much humanity in it as a lead generation form. This perception of humanity gives the chat a personality which is very hard to incorporate in a form.

When a prospect lands on a conversational landing page they are greeted by a few message bubbles and an image at max.