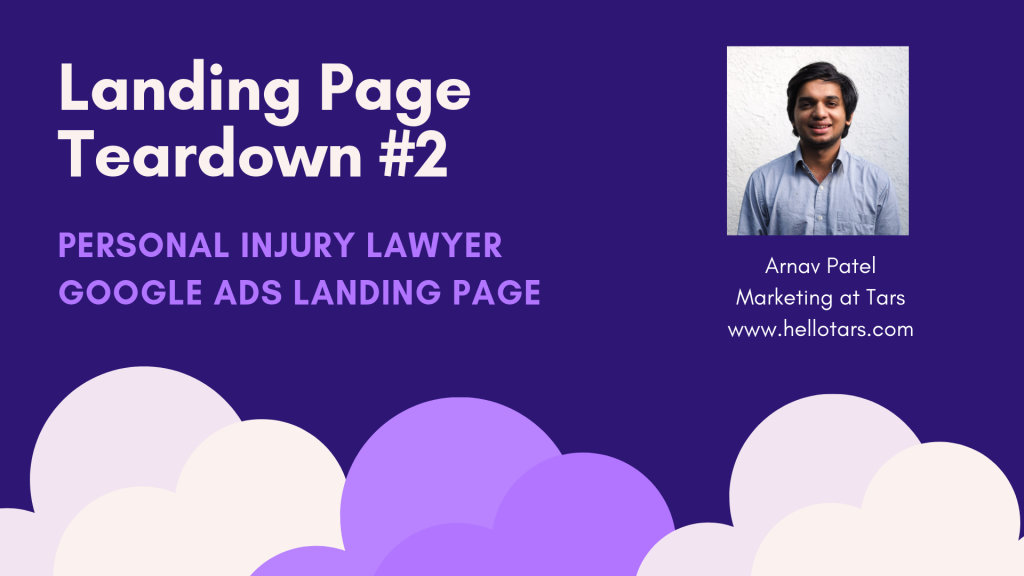 One of the best parts about making these landing page teardowns is that I encounter industries which I previously never knew existed. This week, for example, I took a look at the landing pages of Personal Injury Lawyers.

Personal Injury Lawyers are the people you call if you’ve been in a car accident and you want to sue. If you haven’t been in a car accident yourself, you probably didn’t know that this was a category within the legal space (I honestly didn’t before this teardown), and you also probably don’t know that it is a super-competitive online marketing vertical with some of the highest cost per clicks across industries (seriously, these guys pay hundreds of dollars per click). One aspect about this industry, which you are most certainly familiar with , is their use of terrible landing pages. Like with most other industries dependent on online advertising for revenue, PI law firms make some horrendous landing pages, that I got to pick apart this past week.

Some quick facts about the Personal Injury Law Space:

I googled Accident Lawyer Los Angeles, and as expected a bunch of ads popped up. I clicked on the third ad and this is what I saw.

(You can check out the actual landing page over HERE)

There are two glaring flaws with this page which I would change.

I said the same thing about the landing page from last week, but this is a recurring problem with PPC landing pages. At first glance, there is so much stuff to read on this particular landing page. The bar at the top extolling the benefits of the law firm, the menu in the top right, the multiple CTAs (I’ll discuss this next), the headline and that’s just in the first fold. Scroll down a little bit and you are greeted by blocks of useful, but boring text.

While I’m sure that all of the information on the page is useful to prospects, doesn’t guarantee that they will read it. I personally had no idea where to focus my attention when I landed on the page, and I ended up giving each piece of information a cursory look rather than examining any one element fully. In fact, as I mentioned last week, a 2008 study by Nielsen showed that prospects read 28% of what’s on a page, indicating that my experience is not singular.

This is perhaps my biggest qualm with the landing page. In the first fold itself there 6 CTAs (2 mentions of the phone number, 2 us buttons, 2 “do you have a case” buttons and the free consultation button).

On top of this, if you scroll even a little bit, there is a form.

And, speaking to my UX designer friend, he thought the text in the bar at the top was clickable.

This is downright confusing. While I’m sure any of these CTAs would help me get the services that I’d need, I also know that sometimes as a prospect I personally would appreciate less choice so that I have to think less about how I can further the interaction.

Conversational Landing Page as a Solution

I made a conversational landing page (you can check it out here). Here is how it addresses the above problems:

Similar to what I said last week. At each stage of a chat conversation a prospect has to read a few tweets’ worth of text. This gives prospects a single part of the page on which they can focus their attention and ensures that all the text on the page is read.

In a chat interface is really only one CTA which prospects can use to progress their interaction with the website, and that CTA is almost always in the same place: at the bottom of the chat screen.

To add to this simplicity, the pervasiveness of chat apps in the modern age, means that most prospects know that they should look at the bottom of the screen to find out how they can proceed the chat interaction.

These factors make it easy for prospects to find their bearings on a conversational landing page and progress the interaction before they lose focus.

We’ve found that the first few messages in a conversational landing page are significant factors in deciding how well the page captures and qualifies leads. When prospects make it past these first bubbles (i.e. click a button, or send a message), they are dramatically more likely to convert. The best way to ensure this is to ask a non-controversial, yes or no question in the first few messages that doesn’t take much thinking to answer. For example in the conversational landing page, I made for this teardown, I ask if the prospect is ready to get the compensation they deserve.

Considering that they are looking for a PI lawyer, it’s safe to assume that they do want compensation and they will tap yes fairly quickly.

If you use the conversational landing pages I made for this teardown, you’ll notice that I ask for the details of a prospect’s accident before I ask for their email.

This is intentional. After speaking to some of our legal clients, we have discovered that prospects feel a greater sense of investment in completing the interaction when they perceive that they are getting value from it. This means that if you collect the information which is important to the prospect first (i.e. the details of their accident), it makes them more likely to share the details which are important to you as a marketer (i.e. their email). Or in other words, you have to give them the belief that you are offering them value, before you can ask anything of them.

In my conversational landing page, I included an option in the first messages labelled “I have a question.”

This branch has been added to the conversational flow, again, because one of our clients found that it worked wonders for them. Clicking on this button reveals a few FAQs in button form, which can answer user queries instantly.

This approach might seem silly (because what if prospects have a different question), but it works. For most businesses, the vast majority of user queries are a handful of extremely repetitive questions, so ostensibly, you could deal with 50%+ of all user queries through hard coded buttons like in the chat above. Additionally, for some reason, prospects are more likely to read an FAQ answer when it is in chat form. In fact, the client who told us about this method, found that prospects who had their queries answered by a bot, were 2x more likely to convert than those who read the FAQ page. The culmination of these factors is that if you include FAQs in your chat flow, uncertain prospects are more likely to convert.

If you want us to conduct a similar teardown of your landing page, let us know over HERE

[Tars Feature Update] — Change system messages to your own language

Hey Bot makers! We hope your bot-y exploits are going well and…

At Tars, we are huge fans of the coworking space concept. We…

If you are reading this piece, I assume that you have already…