Your Chatbot needs a better home : It’s your Website

Most of the discussion surrounding chatbots today focuses on use of bots in messaging apps like Facebook Messenger, Kik, Slack and Telegram. While such a discussion is necessary, it severely neglects the chatbot platform which has perhaps the greatest potential of them all : websites. On the surface, a web-based chatbot does not seem like it would be very different from its app based counterparts. The basic premise (of using a conversational interface instead of a GUI interface) is the same. However, in my experience, just the change in location sets the bot up for success in a way that no messaging app can.

The Value of a Chatbot

Working in the chatbot industry, I have found that any mention of the word chatbot automatically takes people’s minds to lofty ideas of super-intelligent conversational agents. In fact, I am willing to bet that when you started reading this article, you probably thought it was going to be about AI in some way. This instinct is understandable. Pop culture has created a mythos around the sci-fi, talking computer which is all-knowing and all-capable (like Jarvis from Iron Man), and has created a seemingly inseparable link between conversational software and the AI that often underlies that software.

I choose a more unconventional approach to the technology.

I believe companies thinking of using chatbots to drive more business should put any thoughts of AI on the back-burner. This is because the vast majority of chatbots which use AI today inevitably disappoint users when they provide an unsatisfactory, often nonsensical answers to basic queries.

Instead I would urge companies to consider chatbots as a separate concept that can exist without any AI at all. My favourite example of a non-AI chatbot is the landing page of Zurich based UI/UX designer Adrian Zumbrunnen. In April, 2016, Adrian converted his personal website into a chatbot:

The bot allows users to interact with it largely through quick replies (those green buttons), and does not provide an open text field where users can input whatever queries they want. This setup doesn’t require any AI, but is by any measure a chatbot. When I speak of chatbots in the rest of this article, keep this chatbot in mind as an example for what I am talking about.

When you strip away the AI from a discussion about chatbots, you are left with what I consider to be the technology’s true asset: the interface. From a web design perspective, I see chat interfaces offering companies three primary advantages: familiarity, mobile optimization and user engagement.

Chat apps in the modern age have become ubiquitous. More people today use chat apps than social media apps and I am willing to bet that even you spend a considerable amount of time during the day in a chat app, be it WhatsApp, Messenger, Viber, or even plain old text messaging. 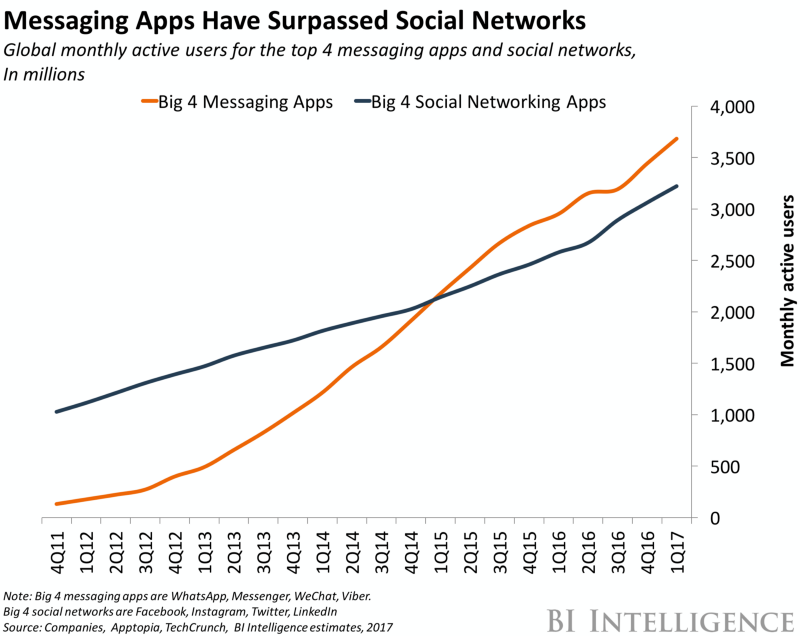 This ubiquity means that if you show anyone a chat interface, they will know exactly how to interact with it.

As trivial as this observation might seem, it is actually a profound outcome from a user experience standpoint. My favorite example to illustrate this point is the pizza ordering process. On the Domino’s website you need to go through at least six information-laden pages each visually different from the previous to place a pizza order. For frequent users, this is not an issue because they are acclimated to the interface. For infrequent users however, the process is incomprehensible at worst (e.g. think about older users) and mildly annoying at best (e.g. a gen-x’er who is ambivalent to technology and blindly gets the new iPhone upgrade every year because it is easy).

A chat interface could serve to improve the user experience of the latter type of users. The whole ordering process could happen in a single page, with an interface that is familiar to everyone from a tech savvy millennial to your octogenarian grandparents. This is probably why Domino’s has created a chat ordering system as an alternative on their site.

While pizza ordering is a relatable example, I see the familiarity advantage being felt most significantly in industries which sell products that do not offer hedonistic, instant gratification and have customers that span the demographic range.

Substitute ordering pizza with taking out a loan or buying health insurance and you can start to see the true value of a familiar interface.

Unless you have been living under a rock for the past decade, you probably know that this whole smartphone thing isn’t just a passing fad. Smartphones have increasingly become the primary screen through which individuals get stuff done, whether it is applying for a mortgage or setting an alarm.As such it is as important as ever for companies to deliver good user experiences on mobile phones.

Yet, if you look at a lot of the sort of design that comes out of, often massive companies, who have the money to hire teams of developers, it is sub-par. For example, if you are searching for car insurance and click on Progressive’s ad on google, after waiting for a few too many seconds for the page to load, you eventually land on a basic web-form, which (as with any form) is a chore to finish on a mobile screen:

Since the whole conversation can happen in a single page, users do not need to endure the load times that accompany traditional interfaces. Furthermore, since chat interfaces are largely the same across the globe(chat bubbles with an input box), designers do not have to spend as much time or effort creating and testing the effectiveness of various user interfaces.

Consider for a moment the Adwords example above. The second gif (where the Ad links directly to a bot) has the same outcome as the Progressive form example(a lead is generated), but the user’s perception of the interaction they just had is completely different. Since most users think that there is some amount of intelligence on the other side of a chatbot, they will view the lead generation process less as them filling out yet another boring form, and more as a real person asking them taking the time out to ask them questions.

The future belongs to companies who are willing to invest in one-to-one human-to-human interactions. It’s time to stop thinking in terms of cost per click but cost per conversation.

In fact, there is hard evidence to support this claim. You might have heard some time last year about a college student who built a conversational agent called DoNotPay, which helped squash parking tickets for 175,000 users. That agent was ingenious not because of any fancy AI that argued with the DMV on your behalf.

Thus far, I have detailed why chatbots are a promising technology at a general level. It remains to be answered, however, why this technology makes sense on the web in particular.

The argument on this front can be split into two parts.

The issues with this discovery method is apparent. Users have to click a button that redirects them to Facebook messenger, where they can complete their interaction. This extra step requires a significant wait time, while the redirection happens (redirection to messenger is is quite slow for some reason), and worse still, when they are finally on the Messenger page users are not in a mind space to conduct business. Facebook Messenger is an app generally reserved for social communications. If a business tried to complete a lead generation sequence in a Messenger window along side chats involving cat GIFs and dinner plans, the user is either going to be annoyed that the business has intruded into a private space or distracted by the promise of a more fun conversation and leave the chat.

The issue with this discovery method too is apparent. Past a few enthusiasts who are really into the chatbots (like myself), no average consumer would go through the trouble of finding the appropriate website only to be redirected into Messenger.

Recognizing these issues, Facebook added a discover tab to their app, in the hopes that people would find it easier and more familiar to look for and interact with businesses on its app:

While this certainly solved some of the discovery fragmentation for the messenger platform, it still begs to be answered whether users would ever open up Messenger to look for a service.

Perhaps they might at some point in the future, but as of right now, the answer is a resounding no. Users are simply not primed to open Facebook Messenger to order a pizza, or browse car insurance plans.

On the web the picture is completely different.

If some one wants to buy a product or a service, the web is their go-to source. Consider a consumer buying insurance. They will likely Google “car insurance,”click on one of the first five results that pop up and proceed from there. Put simply, the web is where users are primed for the business type interactions for which companies build chatbots. This means that users who land on a page with a web-based bot, will be far more likely to complete their interaction with the bot, and far more likely to complete their interaction.

Chatbots on the web occupy a sweet spot between traditional websites and app-based chatbots, that garners the best aspects of both worlds.

They provide the familiarity, mobile optimization and user engagement that companies strive to achieve in their websites while solving the discovery related issues associated with app-based chatbots. This makes the web an ideal place for companies to use the chatbot technology to interact with their customers and drive more business, especially in industries where the product or service that is being bought is not particular “fun” and user engagement is an issue(e.g. insurance, mortgages). Companies which recognize the unique set of advantages could stand to gain significantly from getting on board.

At Tars, we have been helping businesses build conversational bots for over…

All you truly need to run a business , is a TARS bot…

How to Increase Conversion Rates on Mobile Landing Pages?